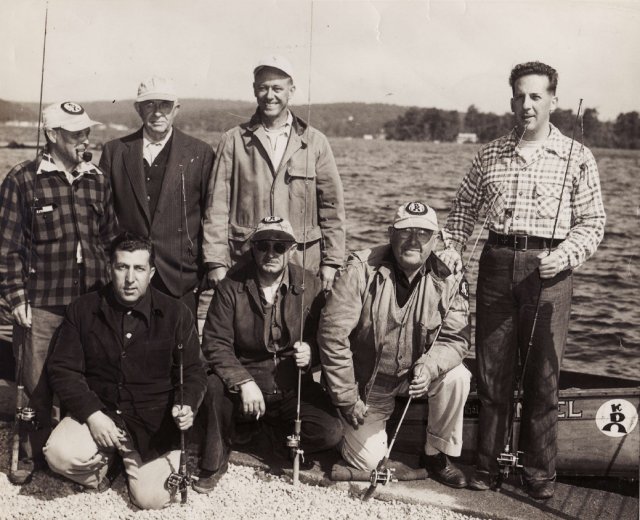 This year (2011) the Knee Deep Club celebrates it’s 65th Anniversary & I often wonder what those original founders of the club would think if they could see what their efforts have led to.  I was President of the Club when we celebrated our 50th and published a small booklet to commemorate that landmark date.  I was able to gather vast files, photos, and miraculously the hand written minutes from the very first formal meeting of the club that was held on August 30th, 1946 at what was then Spencer’s Sport center, which is near where the State Police station sits in Great Cove.

Nine members showed up to that very first meeting that was somewhat informal with the minutes taken on an overturned boat at Spencer’s and a mention that the minutes may not be complete “because Bishop had stopped for several pick me ups at Dugan’s before the meeting”.  That evening they elected a slate of officers and reported $24 in the Club’s Treasury.  But could they have had any idea of how large and successful the little fishing club they were organizing would eventually become?  They certainly had some grand plans as the minutes show that the first President, Herb Spencer, talked of improving the fishing “even if we have to chase all the speed boats off the lake”.  So I guess we got it at least half right because the fishing has improved to something that could never have been imagined in their wildest dreams.  I guess the same could be said for the size and types of boats that now ply the lake’s waters today, “not in their wildest dreams”.

A brief history of the club’s efforts includes lobbying both state and federal agencies for thousands of largemouth and smallmouth bass to help boost those populations in the late 1940’s.  But, it was the Club’s first stocking of trout in a cooperative effort with “Fish & Game” in 1953 that really put the club on the map and set the standards that the club still follows today.  That is, that if we really put our minds to it, there are no limits to what we can accomplish.

That was shown again just last year when we worked with other lake groups and organized the Lake Hopatcong WATER SCOUTS which was able to find and eradicate an isolated colony of Water Chestnut plants before they got well established, which would have had a devastating effect on our lake.

But back to the club’s earlier history.  Also in 1953 the club lobbied the state to stock walleye, large fish were netted in the Delaware River and some came from a commercial netter in Ohio but few survived the trip and the program was abandoned.  In the late 60’s the club tried it again with poor results and then in the late 70’s they tried fingerlings again with poor results and in 1981 they tried with 100,000 ½” fry but still no significant numbers of fish were being reported.

In 1985 the club switched gears and began stocking hybrid striped bass and that immediately became a huge success.  The club stayed focused on that along with their ongoing trout stockings for about ten years.  Every state record “striper” was coming out of Hopatcong and in 1992 the record was broken three times in five weeks!  Can you imagine setting a state record and only have it last a week or two.  In 1993 the state noticed our success and began stocking them in great enough numbers that the club could use its resources to revisit the walleye program and that time we got it right.

We stocked larger fingerlings in the six inch range, but we also committed to long term effort, in that we would stick with it for a minimum of five years regardless of results because we felt past efforts were abandoned too quickly.  Now that also is another big KDC success story as 8-10 pound walleye are now caught every year.  Fish & Wildlife, with their improved facilities are now able to raise and grow enough walleye to sustain that fishery and we partner with them and supply $1,000 or more worth of fathead minnows each year so they can grow their fish to a more suitable size.

In 1996, after a long effort, we were granted permission to stock Muskies in the lake.  Fish & Wildlife, as result of the improvement to their hatchery, quickly embraced this new exciting fishery and we now have 50” world class muskies being caught!  We also have our ongoing channel catfish stockings and improved smallmouth, channel cat and crappie fishing as a result of our massive multi year Spawning Habitat Improvement Project (S.H.I.P) that we started in 1998.  So almost any great fishing experience you’ve ever had at New Jersey’s largest lake is likely the result of some Knee Deep led effort.

I’m pretty sure the founding fathers are looking down with big smiles on their faces, well maybe not with all of the boats they’re seeing, but certainly with the fantastic fishing that wouldn’t be here if not for them.