Mr. Rybak, who died Saturday at home, was employed by Novartis Pharmaceuticals in East Hanover for more than 30 years before retiring as a machinist supervisor in 1996.

He was a longtime usher at St. Marys Church, Wharton, and a member of the National Rifle Association and on the Board of Trustees of the Knee Deep Club of Lake Hopatcong. Mr. Rybak also was a volunteer for the state in the restocking of lakes and streams.

Born in Warsaw, Poland, he came to the United States in 1963 and lived in Passaic before moving to Wharton in 1981.

Surviving are his wife, Josephine; daughters, Yvonne Surowiec and Beatrice, and five grandchildren. 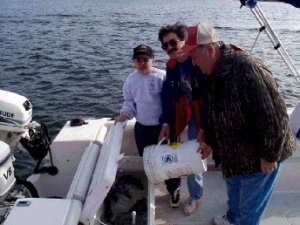 Picture with Mike at center helping at the 1999 KDC stocking.