This larger member of the perch family has maintained the reputation of being one of the tastiest of all freshwater fish. The mild flavored white flaky meat makes for excellent table fare. The Walleye has been known to live as long as 26 years and typically the females grow much faster and much larger than the males. The current World Record of 25 pounds was caught in Tennessee back in 1960, while the current State Record of 13 pounds 9 ounces came from the Delaware River in 1993. Our Historical Club Record catch was an 11 pound 4 ounce Monster caught by William Golwick in 1963 while our current Club Record catch of 8 pounds 15 ounces was made by Horst Kertscher in May of 1990. I can remember when my neighbor Horst caught that fish. He explained to me that he had never seen a Walleye before, he didn't know what he had caught until he took it to Dow's to be identified. Our 1997 1st Place Winner was Charlie McBride #6081 with a 28 inch Walleye that weighed in at 7 pounds 7 ounces, 2nd Place goes to Greg Dyson #6048 with a 5 pound 5 ounce fish that was 24-1/2 inches long. Both Charlie and Greg qualified to received the State's Skillful Angler Award. Ray Kropinack #3484 came in 3rd with a 22 inch 4 pounder and Greg Bacilo #5661 was right behind him with another 4 pounder, Rich Geissuebel weighed in a 3 pound 13 ounce fish that taped 21-1/4 inches our Club President Tim Clancy boated several nice sized 18 to 22 inch Walleyes during the year as did many of our other Club members. Walleyes usually start to spawn in early Spring when water temperatures reach 42řto 45řF. They seem to prefer windswept gravel bars or rocky shoals, the eggs are dropped by the females and fertilized by one or two males. As many as 50 percent or few as 10 percent of these eggs will hatch and 50 to 75 percent of the hatched fry will not survive. Studies in the wild indicate that fewer than 10 percent of the hatched Walleye fry will live to be 3 years old. Young Walleyes grow at a remarkable rate, by late Spring the fry will grow to be 1.5 to 2 inches and by the end of the Summer they will have grown to be 4 to 6 inches long. Here in Lake Hopatcong our Walleyes have demonstrated excellent growth. In September of 1995 Biologist Pat Hamilton's survey unveiled Walleyes from four Year Classes. Look at these remarkable figures, 1+ year old fish were 11.8 inches, 2+ year old fish were 17.9 inches, a 3+ year old fish was 20.1 inches and five 4+ year old fish were from 18.9 to 21.8 inches. I asked Biologist Bob Papson how our Walleye growth compared to the Walleyes of Monksville and Bob explained we were right in line and went on to explain how Walleyes tend to grow at a remarkable rate for thier first four years of age and then their growth rate is at a much slower rate and because the females tend to grow much faster then the males, there could be 3 to 4 inches difference between a 4 year-old male and female walleye of the same year class. In 1994 the KNEE DEEP CLUB committed to and extensive Walleye stocking program and as of the Fall of '97 the Club has stocked 28,000 advanced fingerlings of 5 to 7 inches in length. Because of their light sensitive eyes Walleyes seem to bite best during low light conditions, early morning , dusk, evenings, cloud cover or during a good "Walleye Chop" on the water. Another page in our very"EXCITING FUTURE" 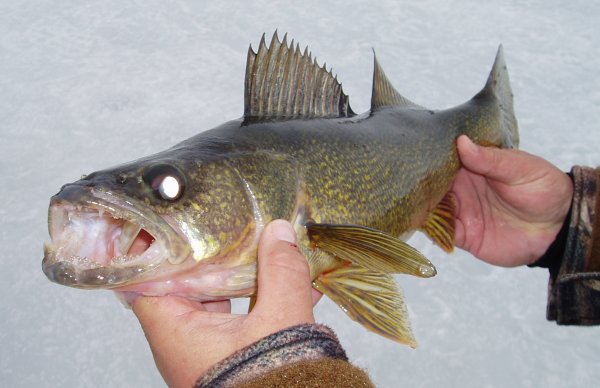 Trap nets also are placed into Monksville Reservoir and Greenwood Lake. Walleye eggs take 13 days to hatch, and hatching percentages range from 40-70 percent. The first million fry to hatch are placed into hatchery ponds after spending their first two days in hatchery tanks. The ponds are fertilized a week before the fry are introduced. This allows for a good plankton population to become established for these tiny fry to begin feeding on. With the cooperation of Mother Nature and the sun, which warms the water in the ponds, the walleye fry become 2-inch fingerlings in 40 days. These 2-inch walleye are stocked into Greenwood Lake, Lake Hopatcong and the Delaware River (good production at the hatchery allowed some 100,000 walleye to be stocked in the Delaware last year). The hatchery keeps 80,000 of the 2-inch fingerlings and sets up six smaller ponds and grows them to 4 inches on fathead minnows. The 4-inch walleye are stocked in Monksville Reservoir, Swartswood Lake, Canistear Reservoir, Greenwood Lake and Lake Hopatcong.